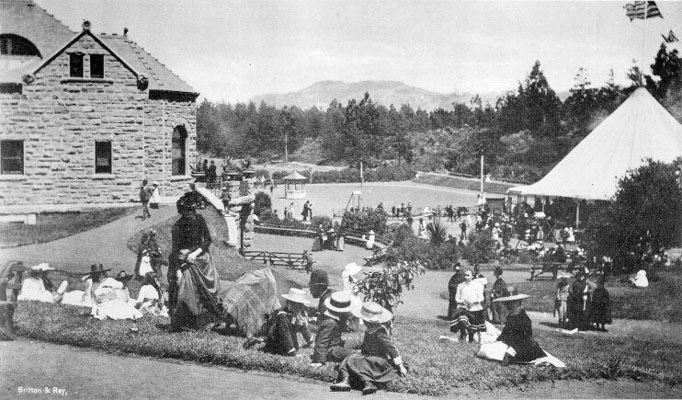 • The park was originally created on 1013 acres of windswept sand dunes in an unincorporated area of the Peninsula, known as the Outside Lands, starting in 1870 by surveyor, designer, and first Superintendent William Hammond Hall. Today, with an addition, the acreage stands at 1,017 acres.

• The California Midwinter International Exposition of 1894, the first world’s fair held in the U.S. west of the Mississippi, offered 2 million visitors a glimpse of things to come in its 180 structures set on 160 acres. The footprint of the fair was the genesis of today’s Music Concourse.

• The park played the role of sanctuary after the cataclysmic 1906 Earthquake and Fire, when 200,000 homeless residents were forced to camp in the park, first in crude shelters, and later in temporary wood barracks.

• The Conservatory of Flowers, opened in 1879 was the park’s first formal structure. Its 12,000 square feet, all covered in glass, contains mostly tropical plants. A gigantic specimen of philodendron, known as Phil, thought to be more than 100 years old, continues to climb into the center dome.

• The San Francisco Botanical Garden at Strybing Arboretum consists of 55 acres with 9000 different kinds of plants from around the world. All this is laid out in geographic, groupings of similar plants, or thematic settings.

• With the threat of extinction, bison have resided in the park since 1891. Today the animal’s names reflect those of Native American origin.

• Originally called the Sharon Quarters for Children, today’s Koret Playground, was the first public playground in the United States. The park contains five playgrounds spread across the length of the park.

• The park’s landscape is home to 680 forested acres, 130 acres of meadows, 15 miles of drives, and 33 acres of lakes. Additionally there are numerous fields and many open spaces.

• The park is host to several free annual events including Hardly Strictly Bluegrass, Opera in the Park, and Comedy Day.

• Cultural institutions ring the Music Concourse including the De Young Museum, established in 1895 and the California Academy of Sciences, first opened in 1923. Numerous statues and monuments also reside here.

• Annual attendance is estimated to average 25 million visits. Half of these are from locals, a fourth from Bay Area residents, and the balance from beyond the Bay Area.