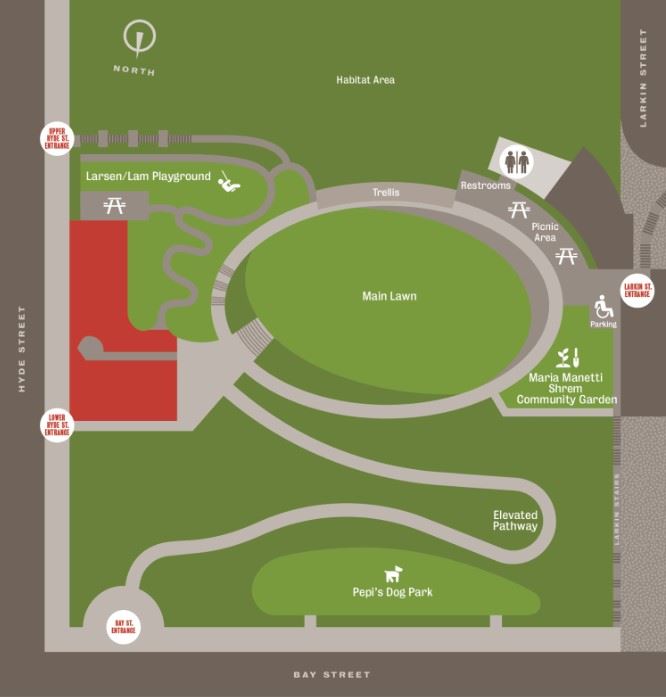 Francisco Park is the largest public park to open in the City’s urban core since 1983. It is on the site of the former Francisco Reservoir, which has remained unused and fenced off since 1940. The Park’s transformation was primarily made possible by a partnership between the San Francisco Recreation and Parks Department and the nonprofit Francisco Park Conservancy. Neighborhood residents raised $27.5 million for the Park’s construction and maintenance after the San Francisco Recreation and Parks Department purchased the land for $9.9 million from the Public Utilities Commission in 2014.

With the completion of the project, Francisco Park is now under Rec and Park jurisdiction.

Bordered between Francisco, Larkin, Bay, and Hyde streets, views from the Park’s terraces include the Golden Gate Bridge, Ghirardelli Square, Alcatraz, and the Palace of Fine Arts. Native plants and trees support local wildlife, and an expansive central lawn offers gathering space for visitors. Additionally, there is a children’s playground and nature exploration area as well as a fenced-in dog run. The Park also includes accessible pathways, a community garden, and a sustainable rainwater catchment system to save nearly 900,000 gallons of water per year.

About Francisco Reservoir
The Francisco Reservoir was constructed in 1859 to accommodate the population boom of the gold rush and subsequent Comstock lode silver discovery. The reservoir was shut down in 1940 after the Lombard Reservoir opened just a block away. A section of the historic reservoir wall and brick reservoir floor still remains near the Park’s Hyde Street entrance, and the resemblance of the reservoir’s outline is still visible on the Park’s pathway paving.

Report a Maintenance IssueTo report a maintenance or vandalism issue at this site, call 311, or click here.