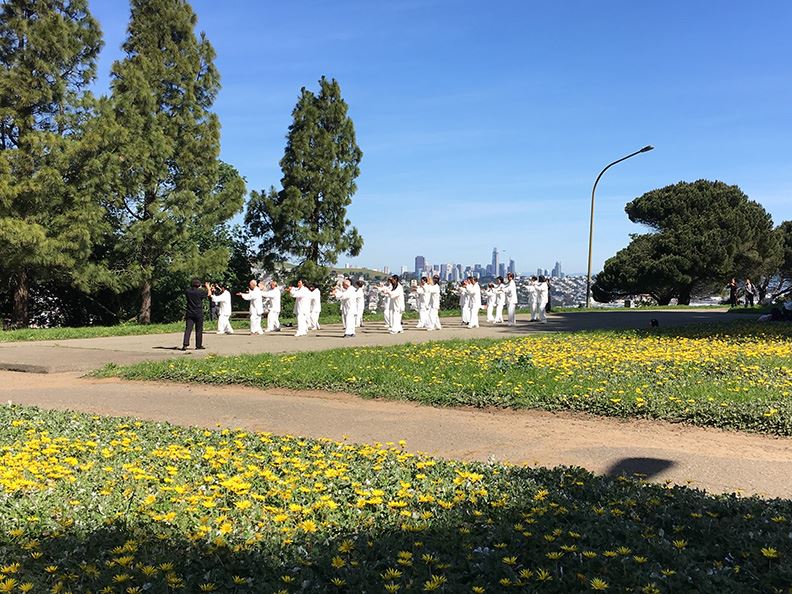 The McLaren Park Courts scope includes a set of projects and proposed improvements at multiple locations throughout the park. The project aims to provide better access to courts and active spaces that specifically cater to Tai Chi and other popular park activities underserved by existing park amenities. The McLaren Park Vision Plan (PDF) identified this effort as a Tier 1 Priority. This scope of work includes the following sub-projects in order of their anticipated completion dates:

Crocker Amazon Court Paths – Provides accessible pathways, gate and fence upgrades, seating, and new trees in the area between Moscow St. and the recently resurfaced Crocker Amazon Courts. The courts include a large multi-use area that is heavily used by tai chi practitioners and other exercise groups. This project is now complete and open to the public!

Mansell Tai Chi Court – A new plaza-like space in the Mansell area of McLaren will provide a great invitation for tai chi practitioners and a variety of other uses. The court replaces a decommissioned parking lot just north of Mansell Courts, where respite from the urban environment and great views of the city can be found in the same space. The court will include improved access, seating, new trees, planting and irrigation, and 4,000SF of paved space intended for active group use. This project received Notice to Proceed on 8/17/2021 with and is anticipated to be back open to the public in December 2021.

Louis Sutter Roller Court – The scope of this sub-project is complete until additional funding can be identified. Conceptual design work and community outreach were commissioned to study an exciting proposal that would add a roller court near Louis Sutter Playground. The proposed court would cater to a variety of wheeled team sports including roller soccer, roller hockey, and bike polo.