On May 13, Mayor London Breed introduced a proposed Health and Recovery Bond for the November ballot. Of the $438.5 million, $200 million is earmarked for accessible parks and recreation centers. From a once-in-a-generation new shoreline park in India Basin to a green community hub that connects Western Addition neighbors, Rec and Park is prioritizing shovel-ready projects that address the city’s growing population, racial and economic disparities, and need for open space in times of crisis. All were selected after extensive community outreach.

Approximately $121 million of this bond measure will be dedicated to various neighborhood parks for projects that already have undergone public review, design studies and environmental review. These projects have been developed in cooperation with various community groups and stakeholders, gone through a robust community outreach process and undergone design analysis and environmental review. 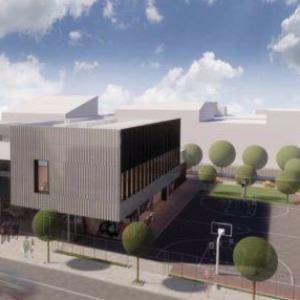 Constructed in 1989, Gene Friend Recreation Center sits on a large site in SoMa, with frontages on Folsom, Sixth and Harriet streets. To serve the existing community and support future growth in the neighborhood, replacement of the facility is needed. The new building will be almost twice the size of the existing one, with a two-story massing for a double basketball court gym and a second story allocated for program space with an increased number of multi-purpose rooms. The project includes improved lighting, security and new outdoor amenities, such as basketball courts, plaza space, a playground and landscaping. Up to approximately $50 million of bond funding will be allocated to the Gene Friend renovation project.

Note* (Should the Gene Friend renovation project receive funding through sources outside of this bond measure without holding or delaying the project delivery schedule, unused bond proceeds allocated to this project will be reallocated to develop improvement projects at other neighborhood parks including, but not limited to, Jackson Playground, Buchanan Street Mall, Mission Recreation and Arts Center, and a new park located at 11th and Natoma streets. 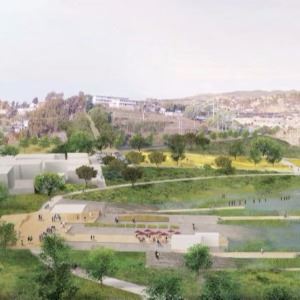 Located at the north of the Bayview neighborhood, India Basin Open Space has one of the City’s few remaining wetlands and is the only natural area within the Recreation and Park Department system that borders the Bay. It features tidal salt marsh and upland habitat that provides food and shelter for a variety of shorebirds and foraging habitat for raptors, as well as Bay Trail connections, access for kayakers and bird watching. The adjacent India Basin Shoreline Park offers a playground and picnic area. In 2014 the Recreation and Park Department purchased 900 Innes Ave., located between these two parks, with the intent to connect the sites and create one grand waterfront park that will close a critical gap in the San Francisco Bay Trail and increase access to open space that is accessible to many under-served neighborhoods. Along with planned improvements to India Basin Open Space funded by the adjacent housing development, the India Basin project will create a 20-acre network of new and/or improved open space. The new park will feature pedestrian and bicycle shoreline access, passive open space, fishing areas, tidal marshes, plazas and event spaces, concession stands, picnic areas, site furnishings and historical and educational displays. 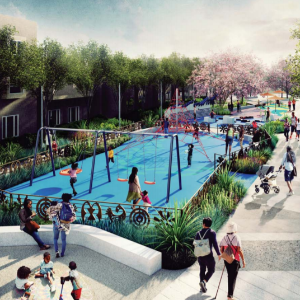 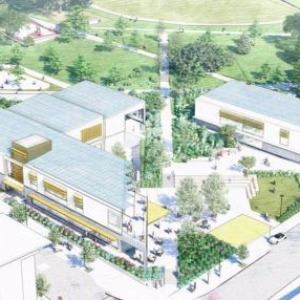 Herz Playground, situated on the southeast corner of John McLaren Park, serves the Visitacion Valley neighborhood. The Herz project includes the construction of a new recreation center on park property. The new facility will be approximately 11,500 square feet and feature an indoor basketball court, bleachers, office space, a multi-purpose room, restrooms and other spaces for storage and building systems equipment. Outdoor improvements will include a plaza at the entrance, installation of adult fitness equipment, lighting, removal of hazardous trees and pathway and circulation improvements to connect the park with the Sunnydale community and neighboring community center that will be developed as part of the HOPE SF Sunnydale redevelopment. 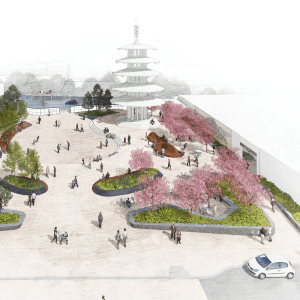 Located in the heart of Japantown between the Japan Center malls, Japantown Peace Plaza was originally built in 1968 and last renovated in 2000. The Plaza includes seating areas and landscaping around the famous Peace Pagoda that defines the neighborhood skyline. For many years, the plaza has been leaking water into a public garage situated below the mall and plaza. The Japantown project will resolve the leaking water and provide a reinvigorated public space for the community. The renovation will include new planting, shade structures, paving, seating, lighting and needed structural reinforcement of the Plaza and/or Peace Pagoda. The new design will provide the community with more functional access to the Plaza, both for everyday and special event use, while harnessing the symbolism that this site holds within the neighborhood, city and region.

For all of the programmatic bond components, including citywide parks, recovery parks, playgrounds, sustainability, and community programs, the Recreation and Park Commission will review and approve funding allocated to specific projects. After identification and development of specific projects, environmental review required under CEQA will be completed.

For more details on the specifics of the parks, open space, and recreation facilities and improvement projects, click here or view the CPC Presentation.

Health and Recovery Bond in the News:

As public housing residents, our families are exactly the San Franciscans the Health and Recovery Bond would help most. Particularly the $200 million earmarked for accessible parks and recreation centers that offer programming like free after school enrichment. The bond is up for its first public hearing Wednesday before the Board of Supervisors’ Budget and Finance Committee.

A Newly Renovated 5-Block Park is Coming to Western Addition

San Francisco has worked with local residents to plan, design, and build new park enhancements aimed at making Buchanan Mall a safe, green, and well-used center for the neighborhood. The project would renovate the park to include edible gardens, interactive art installations, a gracious promenade, and children’s play areas honoring neighborhood heroes.

Parks and open spaces would receive $200 million under the current bond proposal. Of that $121 million would be allocated to park-improvement projects that have already undergone public and environmental reviews and design studies. The remaining $79 million would be spent on park programming, trail improvements, community gardens and other initiatives.

Breed late last year had asked the city’s capital planning committee to replace a parks bond measure already under consideration for the November ballot with a proposal that spent more on mental health services.

The City of San Francisco is set to receive a $8.5 million grant from a voter-approved bond measure to help transform a former industrial lot in India Basin into a waterfront park.

The City of San Francisco is set to receive a $8.5 million grant from a voter-approved bond measure to help transform a former industrial lot in India Basin into a waterfront park.

The long-neglected stretch of shoreline is scheduled to receive a $125 million renovation, to convert it from an empty lot into a neighborhood park.

The Importance of Parks for Well-Being and Recovery

Fixing the Outdoors Will Fix Our Economy

While it’s great to see so many Americans turning to the outdoors to bolster their physical and mental health in this difficult moment, the resources needed to provide families and communities natural spaces for recreation and play are stretching thin.

In these stressful and uncertain times, parks have become even more central to our physical and mental health, and safe access to them must be maintained.

Landscape architect Frederick Law Olmsted, advocated for the healing powers of parks, which he believed could act like urban lungs as “outlets for foul air and inlets for pure air.”

Equal, accessible and resilient public space can promote civic health during a pandemic. Over the long term it will promote the health, welfare and equality of our cities for decades to come. For in the end, urban resilience is not purely a physical, nor a social, nor an economic goal. It is one, like well-made streets and sidewalks, that should connect every part of public life.

OpenRoad with Doug McConnell highlights the importance of our wetlands on the shores of the San Francisco Bay, which includes the future park site at India Basin and its neighboring shorelines. The video shares the history of the bay’s wetlands and looks to the future, discussing what we can do to secure these natural resources and fight climate change.

In addition to English additional language options can be found by clicking the CC (closed captioning icon) in the bottom right corner of the video. They include: Traditional Chinese, Korean, Filipino (Tagalog), Vietnamese, Russian, and Spanish.

Together we can shape the future of our parks! To sign up for general park updates, click here: http://bit.ly/updatemeRPD

Back to the Park Improvements homepage