At India Basin, the Department, in partnership with Trust for Public Land, the San Francisco Parks Alliance, A. Philip Randolph Institute, and the BVHP community endeavor to build a park that is both spectacular and crucial to the health of San Francisco’s southeast communities, which have been historically underserved. The development of 900 Innes will transform a post-industrial brownfield into the 21st-century legacy park in a historic waterfront context, with an emphasis on:

The proposed plan combines the existing India Basin Shoreline Park area and 900 Innes property into one grand 10-acre waterfront park development that closes a critical gap in the San Francisco Bay Trail. The property is also the mid-point of the one and a half-mile-long India Basin shoreline, which is comprised of seven properties totaling 64 acres, six of seven of which are in some stage of development.

As such, there is a unique opportunity to design these properties so that the India Basin shoreline becomes a seamless waterfront park experience on a grand scale. It will be integrated parks, trails and open space systems with a comprehensive set of programs and amenities, trails that connect gracefully, one signage system, and furniture and fixtures that complement each other.

As part of an ambitious plan to restore a decaying shoreline along the San Francisco Bay, the first phase of the India Basin Waterfront Park Project addressed decades of pollution and environmental degradation in an area marred by heavy industrial use. Bayview’s own Rubecon Builders successfully remediated the future park site at 900 Innes, laying the foundation for a new park and supporting future restoration efforts while creating a robust wildlife habitat along the shoreline.

The remediation project removed and restored contaminated soil and sediment left behind from industrial boat building and vessel repair activities. The construction activities also removed contaminated marine debris, abandoned structures, and deteriorated concrete to enable future park development. The landmarked Shipwright’s Cottage was preserved and abated of hazardous building materials and is ready to be restored during the construction of the 900 Innes Park.

The construction activities occurred on land, as well as within the shallow waters lying immediately to the north of 900 Innes Avenue. The offshore remediation activities included the removal of debris and dilapidated structures, followed by targeted excavation of between four and five feet within the intertidal and subtidal zone, installation of a coffer dam, and placement of an equivalent backfill material (beneficial reuse material) to serve as a protective cap.  On land, the work cleared the site of abandoned structures, unusable concrete surfaces, and removed two feet of soils followed by backfill to support future park design grades per the Remedial Action Plan. A minimum of a six inch to one-foot-thick offshore sand cap was placed in the mudflats near India Basin Shoreline Park to protect the current sediment from disturbance and prevent uncovering of sediment that contains slightly elevated concentrations of contaminants of concern below the surface.

Following the completion of remediation at the 900 Innes Avenue, the project partners, working with Swinerton Construction, will transform the site into a new bayfront park that includes:

After the completion of 900 Innes Park, the project partners will turn their attention to the renovation of India Basin Shoreline Park (IBSP), an existing 7.5-acre site originally constructed in the 1990’s. The proposed plans for IBSP include major site regrading to ease steep slopes to allow for more site access and create additional opportunities for shoreline habitat. The concept plans would maintain and expand the current active recreational amenities and increases opportunities to gather, recreate and play. 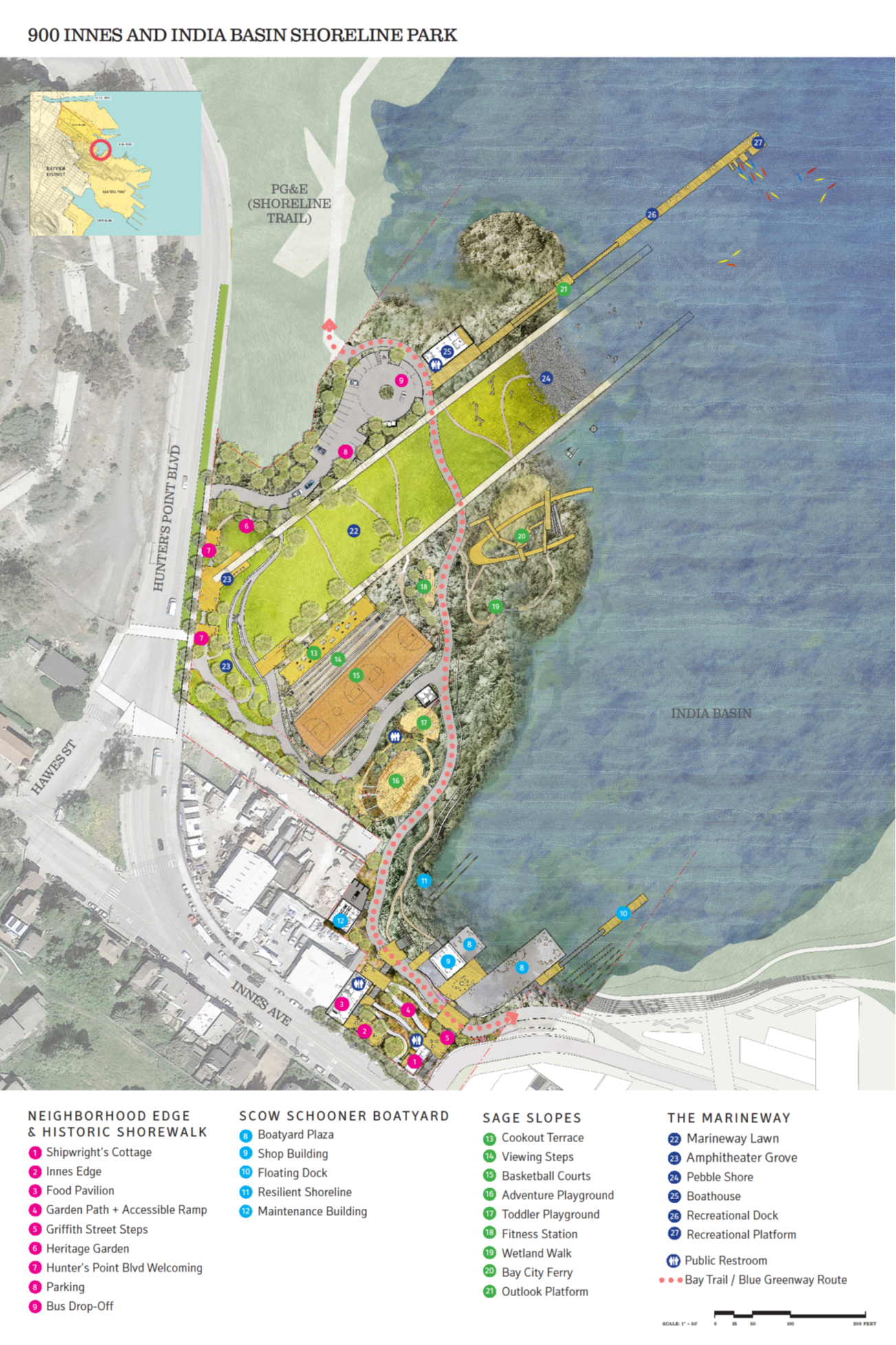